It’s when the trailer starts to sway as it nears maximum tipping height that the alarm bells begin to sound.

There is a lot of metal up in the air and, on a less-than-even surface, instability and a potential for the trailer to come crashing down on its side should get the most gung-ho trailer operator reaching for the “down” lever.

There is no such concern with a trailer that does not tip to discharge its load, but pushes it out instead; and the absence of tipping rams has other benefits too – not least the ability to get a big trailer into a small, low building and still deposit grain, silage, sawdust or the like.

These particular situations aside, however, the biggest draw for farm trailers of this type is capacity and productivity, particularly for contractors hauling chopped grass or forage to the silage clamp.

For one thing, the lack of a tipping body chassis means these beasts of burden are hunkered down, even on generously proportioned tyres, with tall sides and long bodies creating a large-volume container.

Then, the unique ability of an ejector trailer to compress or compact the load transforms the size-for-size carrying ability compared with a tipper.

Manufacturers claim various figures, typically from 30-40% in terms of the increased bulk of material their trailers can get on board, all depending, of course, on the dry matter content and compressibility of the material.

An independent assessment by the Grassmen in Ireland with a Ktwo Compact & Push 1800 trailer showed an increase from 10.5t while filled normally to 12.6t when compressed during the filling process.

That extra 2.1t of “very dry grass” makes a significant difference to productivity and costs over a day, let alone a whole silage-making season.

As a result, users have found they can often cut one or two trailers from the team, depending on haul distances and clamp accessibility.

While most manufacturers settle for producing a standard ejector trailer suited to handling silage crops, some offer variations on the theme to suit particular applications or to add versatility for year-round use.

Larrington Trailers, for example, produces a side-discharge elevator assembly that replaces the regular rear door, while Fliegl can provide a spreading module for manure and compost application.

The German manufacturer also makes body-swap versions to use an expensive chassis and running gear across different roles, as does HiSpec with its push-off body and slurry tanker units.

The Ejector is produced by Bailey Trailers, Lincolnshire, in two sizes – the Ejector 18, a twin-axle model of 34cu m capacity, and the triple-axle Ejector 22 TRI with a 40cu m body.

In both cases, the trailers have an all-welded construction, with rectangular hollow-section steel beams forming the chassis, angled strengthening channels reinforcing the heavy-gauge body panels, and thick steel plate forming the floor. 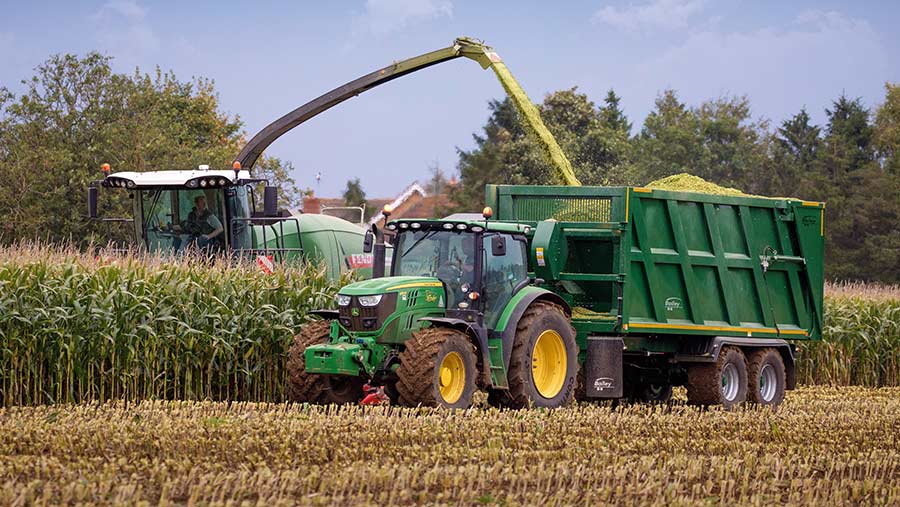 The emptying bulkhead is pushed to the rear of the body by two hydraulic cylinders working in tandem, with a retracting reel keeping hydraulic hoses contained and protected from potential damage.

Replaceable seals along the bottom and sides of the bulkhead ensure clean discharge of materials, and for grass and maize silage, in particular, longer-than-usual tailboard lift cylinders give added clearance to cleanly push out heaped loads.

When closed, the door is held securely by a hydraulic locking mechanism. 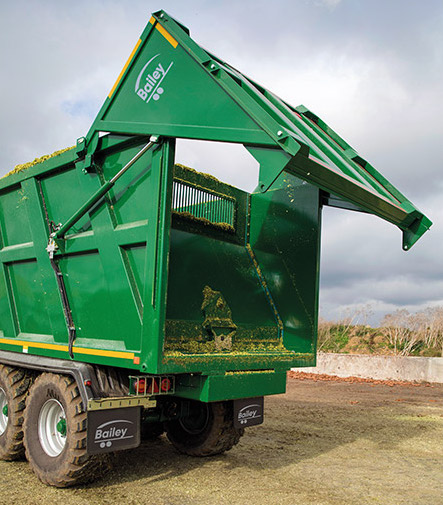 The push-out bulkhead on the Bailey Ejector © Bailey Trailers

The trailers run on commercial axles with 32t suspension complemented by a drawbar leaf-spring arrangement for fast hauling speeds; they also have both hydraulic and air-operated brakes.

Other standard features include LED lights, a viewing grille across the upper panel of the bulkhead, mudguards and flaps, and BKT 560/60 R22.5 tyres, and a front-to-rear roll-over cover is available to keep loose materials in place.

Having pioneered the ejector agricultural trailer concept in the late 1990s, German manufacturer Fliegl Agrartechnik has since created a large number of models and variations, including trailers for hardcore and soil, as well as for “soft” materials such as silage.

There is also a choice of rear-end attachments that convert the trailers to other roles, such as manure and compost spreading.

For grain haulage there is an extension with slide opening for emptying into a pit or auger hopper, or an unloading auger to transfer loads to trucks and road trailers.

Potatoes and sugar beet are catered for with rear elevator attachments. 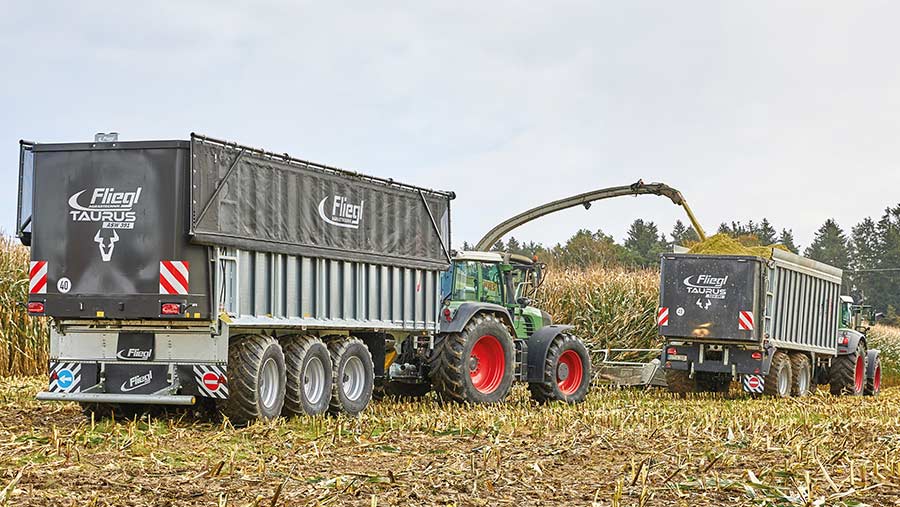 All are constructed from galvanised steel, with the U-shaped tailgate lifting through 90deg for emptying, while about two-thirds of the bulkhead is glazed to give a good view into the trailer when loading.

To minimise debris being blown out of the trailer when hauling to store, hydraulically operated front-to-back load nets and full-length side flaps are optional.

A sprung drawbar complements the choice of running gear, which covers multi-leaf, parabolic, hydraulic and air suspension, and a unique feature is the option to reposition the axles along a length of the chassis. 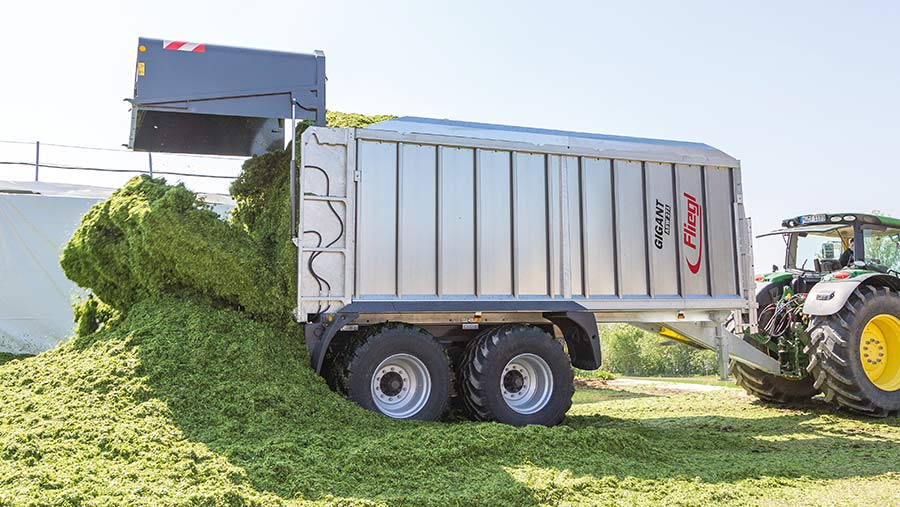 The mechanical system would suit trailers being reconfigured for manure spreading, for example, while hydraulic adjustment provides scope for increasing the drawbar weight to improve traction or reduce it for a more balanced setup during road travel.

A demountable package is also available, enabling a single chassis to operate with Kompactor and slurry tanker swap-over units.

A key feature, says HiSpec, is the moving floor section, which occupies just under half of the total floor length, and the way the headboard moves along this panel.

When filling, both elements are positioned at the front of the body. To compact, the floor section carrying a fair proportion of the weight of the load slides with the headboard. 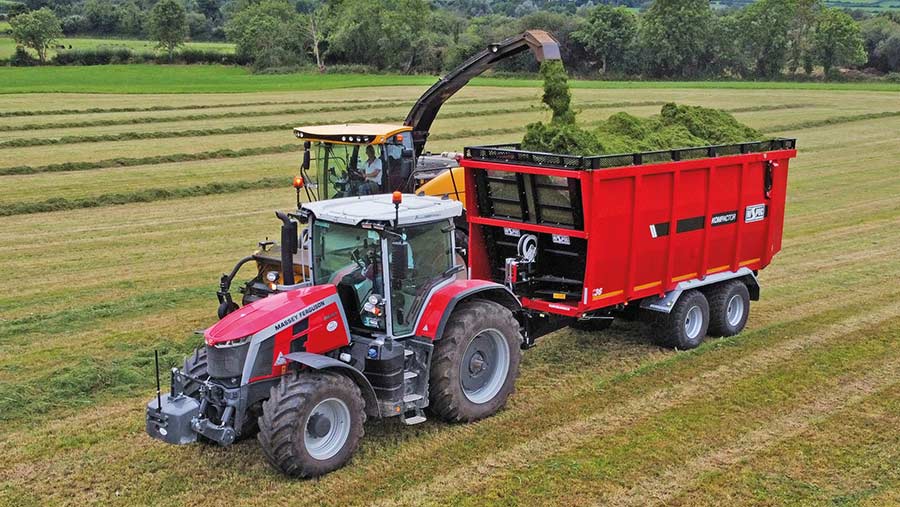 Likewise, when it comes to emptying the load, which HiSpec says takes up to a minute at most, the two elements work in tandem, with the three-section hydraulic cylinder at full stretch to push the headboard to the end of the floor section and body simultaneously for a clean and complete discharge.

A reel keeps hydraulic hoses neatly stowed and the top half of the headboard is formed as a see-through panel to give the tractor operator a view into the trailer body.

This is shaped with slightly convex side panels reinforced by vertical strengthening ribs.

Meanwhile, 200mm greedy boards can extend the body, and light materials are kept in place by fitting a powered front-to-back load cover. 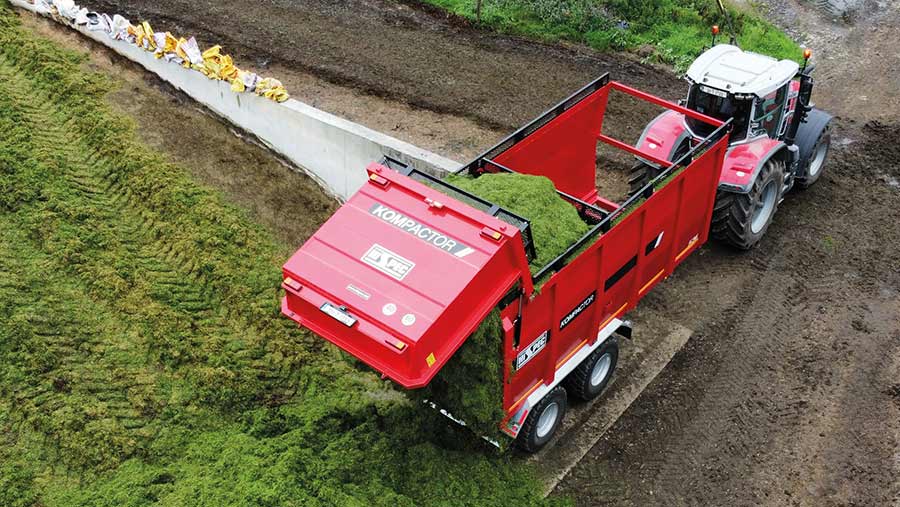 After lifting clear from the “drop and lock” position, the U-shaped tailgate lifts through near 90deg on stubby hydraulic cylinders for plenty of discharge clearance.

Hydraulic drawbar suspension complements the parabolic axle suspension, while air-over-hydraulic brakes, 445/65 R22.5 tyres as standard (others optional), and a rigid or steering rear axle (standard on the K40) complete the running gear.

LED lighting is installed, a rear-view camera is optional and Dinamica Generale weighing can be added to accumulate weight records and avoid overloading.

Seals around the hydraulically operated bulkhead enable the Roadeo Compact & Push trailers to handle grain as well as woodchip and forage crops.

Design capacities for the trailers from UK manufacturer Ktwo are 18t, 20t and 25t, with each of those available with two body heights to achieve six different body volumes from 24cu m to just over 42cu m, or about 29cu m to 49cu m when piled high with chopped grass or maize. 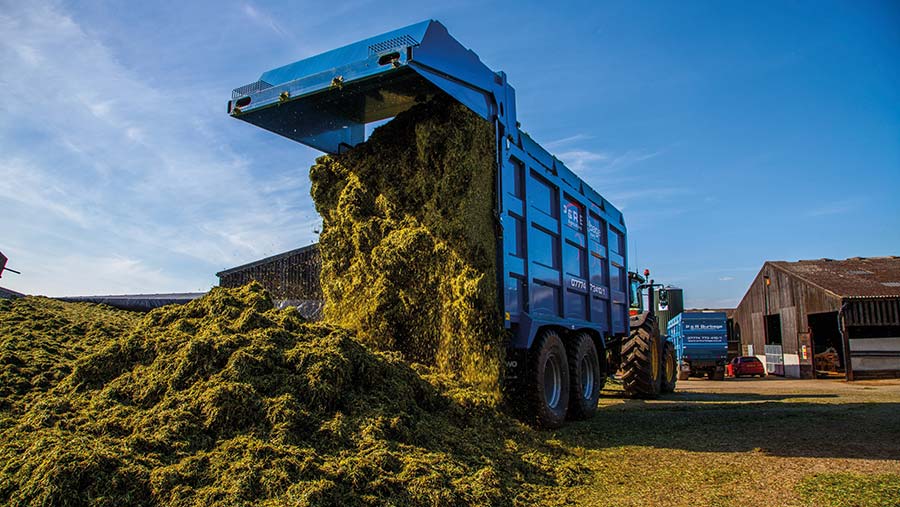 The flat-sided steel bodies are reinforced by upright and horizontal ribs, on a chassis that rides on tandem axles for the 18t and 20t models, and triple axles for the 25t model.

The 120x120mm axles are located by 32t-rated parabolic leaf spring suspension, which is complemented by a sprung drawbar, and carry wheels with 385/65 R22.5 tyres as standard across the range.

Up front, just under half of the hydraulically operated bulkhead is perforated to give the tractor driver a view inside.

A single-stage hydraulic cylinder moves the bulkhead and the associated floor panel that supports the weight of some of the load during compaction and unloading.

Ktwo reckons the mechanism can increase load capacity by up to 40%. 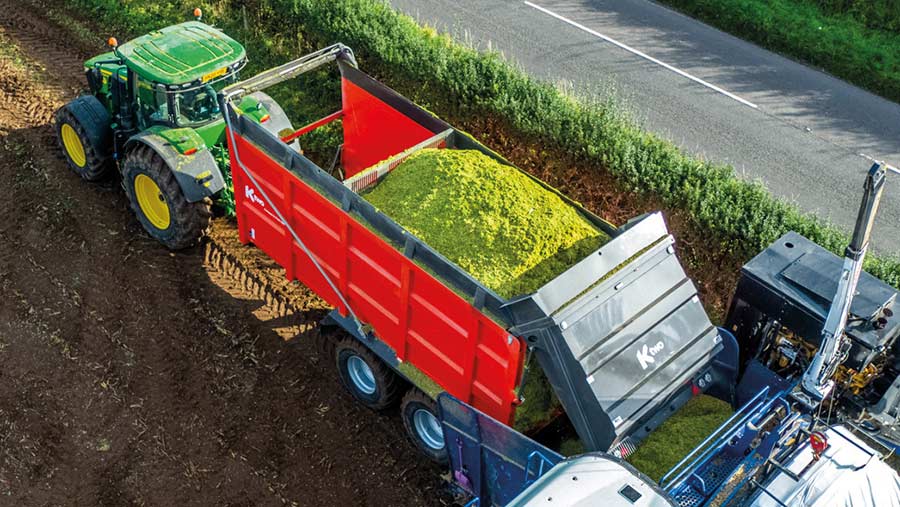 Integrated mudguards and rubber flaps are fitted as part of the package, along with lighting, and a front-to-back cover is available to stop light material being blown from the load.

A high-lifting clamshell-style tailgate that pivots through 90deg is a feature of Richard Larrington’s regular Ejector trailers, which are built in Lincolnshire.

The design ensures plenty of clearance beneath the door for cleanly discharging heaped loads and also to maximise body volume while ensuring the moving bulkhead reaches the very end of the floor.

When closed, a hydraulically operated hook locking mechanism secures the tailgate in place. 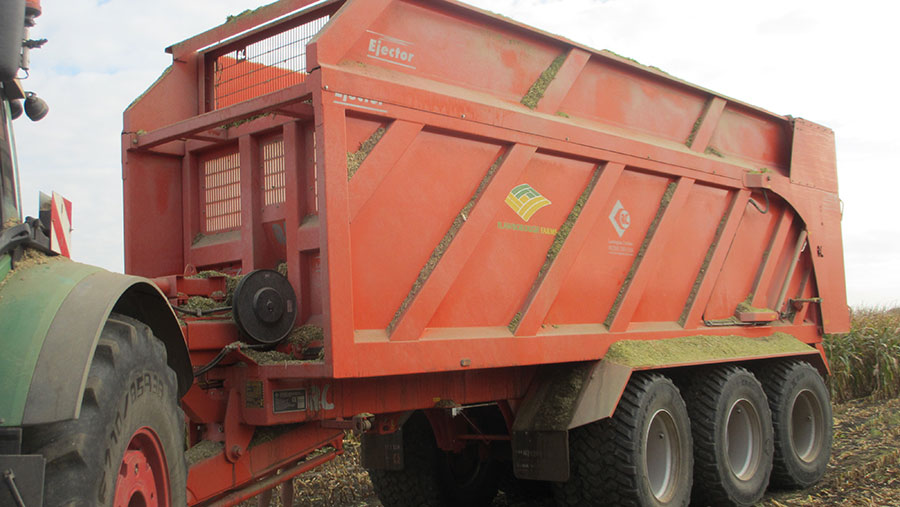 Large-volume, all-welded bodies are reinforced by slanted box section ribs down each side, while tandem or triple commercial axles with high-capacity brakes, suspension and steering options provide the running gear.

The load-emptying or ejection system comprises a moving floor panel that supports part of the load and reduces the initial force needed to begin discharging.

One hydraulic cylinder pushes the floor and bulkhead together. Once fully extended, two more rams, arranged in tandem, take over, pushing the bulkhead along the sliding floor panel to the rear of the trailer.

Durable rubber seals enable the Ejector to handle grain as well as silage and other loads, including sugar beet, which Larrington says compares well with a tipping trailer when heaping into a clamp. 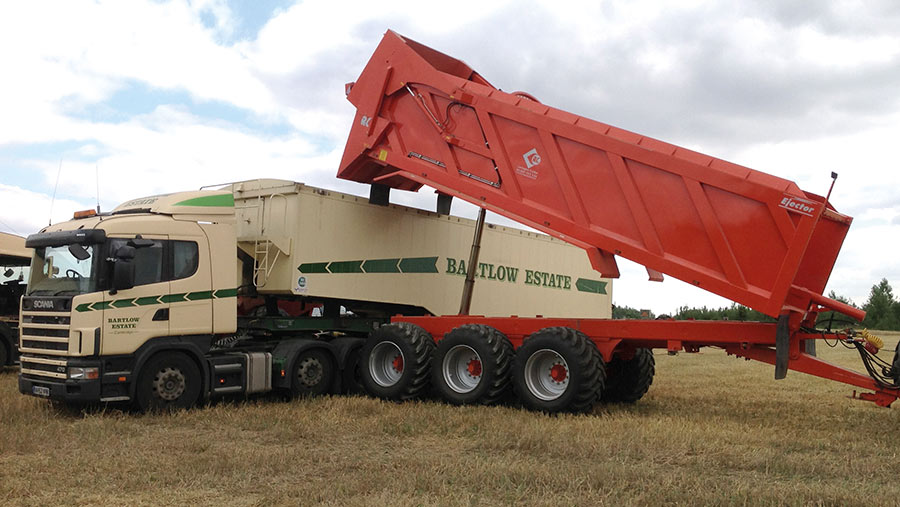 New features include anti-spill side extensions that automatically rise into position to prevent overflow – especially when carting grain – as the bulkhead is activated to push out the load, and a hydraulic drop section at the end of the floor as the tailgate is raised to further increase the space available for a clean discharge.

More specialist innovations include a rubber belt side elevator that replaces the regular tailgate for emptying into a crop reception pit or hopper, and a blower installation that can be used to transfer loose materials into a hopper.

There is also a “reverse tipping” version that raises the tail for push-out unloading of crops into another trailer or road-going truck, and an ejector body conversion for a construction site earth dumper to work as a self-propelled beet or grain chaser.

Prices: On application for bespoke builds.

The different capacities are achieved largely through body length, with a steeply sloping bulkhead taking the load space out over the fully enclosed front end of the body and also the drawbar, to some extent. 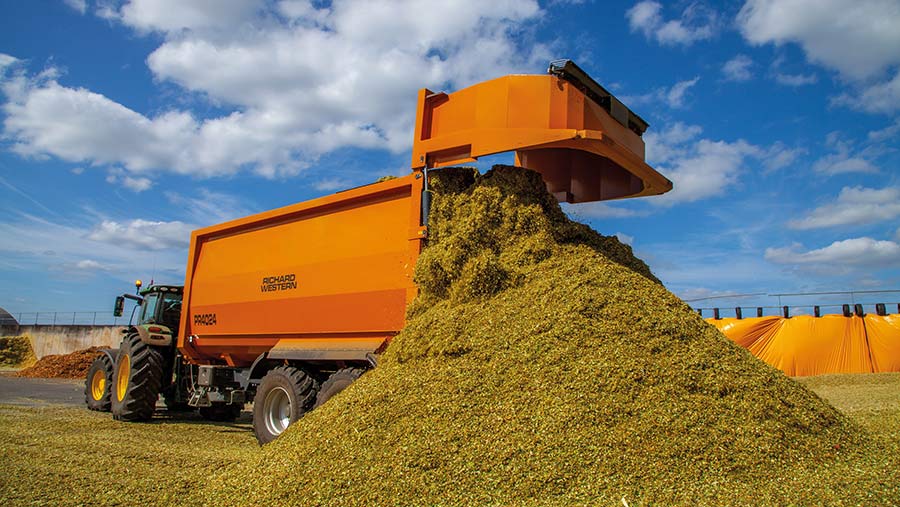 In addition, the bulkhead, with its perforated upper panels providing a view into the trailer, is moved using a single multi-stage hydraulic cylinder.

This is guided along I-section steel beams in the base of the body and supported on four industrial wheels for smooth running and to reduce friction.

There is a standard seal made from wear-resistant PE1000 thermoplastic and additional sealing is available to enable the trailers to handle grain and similar materials in addition to forage crops for silage.

Richard Western’s barrel-shaped monocoque trailer body sides are constructed from single sheets of 5mm steel plate, reinforced along the top and bottom and at each end, while the floor is built from 8mm sheet.

At the rear, the closed clamshell tailgate drops into a mechanically locked position to withstand the forces generated as the contents are compressed.

While the 30, 36 and 40cu m models run on tandem axles and operate from the tractor’s hydraulic outlet, the 50cu m version is a triple-axle trailer with its own pto-driven pump and oil supply. 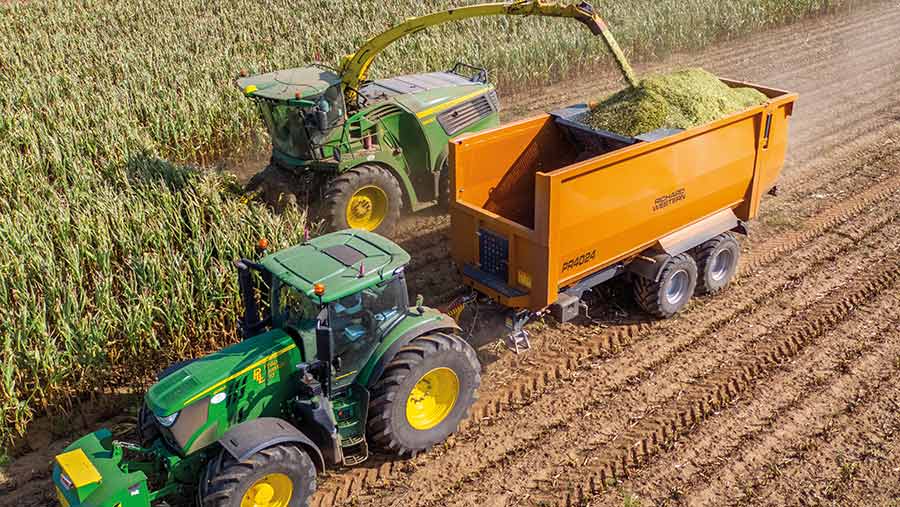 Hydraulic suspension with the further option of a load cell weighing system is on the options list, together with passive or active steering axles, air and hydraulic braking circuits with anti-lock on the air system, and a front-to-back load cover.

Wed Jun 29 , 2022
Up until the break of the brand new millennium, business journey has at all times gave the impression to be more of a burden of business expenses and earnings. In reality, most of the places we’ll mention as we speak are only an hour or two away by car, in […]